Yesterday, I had a pretty good Valentine's Day, despite the lingering effects of the traditional February cold. A year ago yesterday was the worst Valentine's Day ever.

The February cold hit me worse than usual that year, but fortunately I had some cats to curl up on my chest and purr me better:

That's a rare moment of cooperation between the three cats. The orange one and the dark gray one don't get along too well. But Muswell - the one in the middle with the big, broad white chest - was able to keep the peace between them. Everybody liked Muswell. 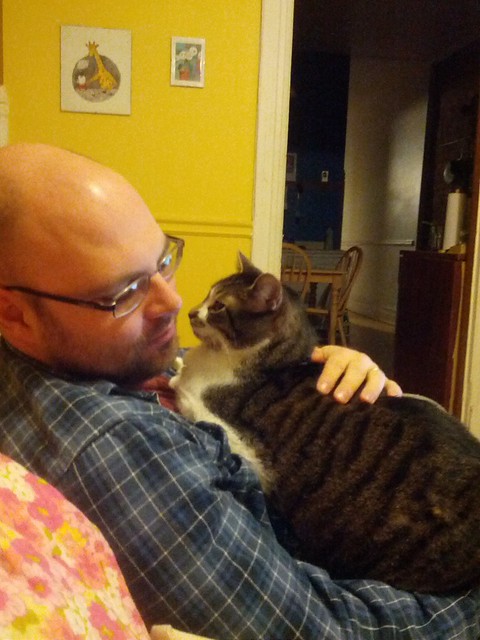 It was especially gratifying when Muswell cuddled up to me like that, because it was so fleeting. He really loved to make biscuits on my chest, but he had no sense of proportion, so it basically he would stare into my eyes while purring and punching me in the breastbone REALLY HARD. But I treasure that punching, because it would never last long. After a few seconds or minutes he would suddenly panic, smack me in the face, and run. He had huge emotions, and they confused him greatly.

Cats all have their own personality, and Muswell had the personality of a nervous but inquisitive little child. He was always sticking his snout into things trying to find out what was up. The first Halloween after we got him, I had some friends over to play Arkham Horror, and he kept jumping up and messing with all the cards. After that we kept joking that he was a little introverted geek boy - he didn't know how to relate to people, but he loved games with little mechanical bits.

We joked that he loved board games, dreamed about punching bad guys, and wanted to be a wizard. I know that was projection, but it just seemed to fit him so perfectly.

Just look at that chest! And that round face with those stripes!

While Googling around once, we found a Facebook post from someone who does reiki for cats. No name given, but it was clearly him:

We received a request from a Mama who is staying with a cat that is around 5 or 6 years old. She told us he may have some kidney problems and is also overweight. She asked for mental and physical healings for him.

This kitty was quite interesting and quite complex. There were a lot of layers to him. He wanted us to see it from HIS point of view. While he did take in the Reiki and found it relaxing. He showed it in a movie form of how other cats were coming in his house, touching his stuff, his Mama so he was marking. That’s why he was peeing. (we did suggest Feliway which helped my cat when we had an addition to our family) He told us he knows he is overweight but he was used to eating when and what he wanted. Then it was just taken away and these changes made him sick. He said what boy wants to be healthy? He doesn’t have any issue with his weight. (Quite funny, boys are so funny) SO he got angry because he wasn’t getting enough food.

I have to say, they really nailed him. He DID have a lot of layers. He WAS quite complex. And he loved to eat. He would never turn down treats. What boy wants to be healthy?

Here he is keeping my company while I work. It took a long time to gain his confidence, but once I did, he was very loving.

Although that photo is labelled, "Begging daddy for food," so it may not have been entirely love and devotion that led him to be there.

A couple of days after Muswell helped nurse me through my illness - February 14, 2014 - we woke up to find him lying on the bathmat, with his little back legs not working. The vet said it was a blood clot, and his only chance was surgery - but it only had about a 30% chance of success, and we would have to bundle him into a cab and drive across town to a specialist. He would have hated that. He was already stressed from being at the vet, and we didn't want his last moments to be even more miserable, so we fed him a treat - he ate it while growling at the vet, like he always does - and then put him to sleep.

I'm glad he got a last treat before he want. I wish I'd thought to give him more. What boy wants to be healthy?

When Diva died, I put a memorial post up almost immediately. But Muswell's death was so sudden, and unexpected, that it took a long time before I could face the task. I still miss him a lot. Our new cat is very sweet, but Muswell was... complicated, like the reiki lady said, and that made him even sweeter. He was a special little boy.

Rumor has it that LJ has been bought out by someone who plans to do a lot better maintenance and upkeep than has been the case for the last few years. Not sure if this dying behemoth can be brought back to life, but I wish the project well.

I just wondered how many folks are still around. Why not everyone who reads this post a message to your LJ that you are still around, still exist, and lets see if there's any community left here. So like the Whovians from Horton Hears a Who

Yep, I'm still here. Although I mostly just read other people's posts these days, at least if you post something, I'll see it.

Last year I posted a suggested reading order for George R. R. Martin's A Feast For Crows and A Dance With Dragons. The object was to interleave chapters to get the story in roughly chronological order, rather than split by geography.

Last month I saw a couple of people in a row walking around with copies of A Dance With Dragons, and it made me want to re-read it. So I sat down with my split reading list to see how it held up.

Diva came home with me in 2006, after her previous owner went to live in France for a year. The first thing I posted about her was

and now she came back to be petted and was pretty insistent about it. We're gonna get along just fine.

Last Friday, Diva had a flare-up of a chronic problem (normally minor but uncomfortable) so we took her to the vet for a "spa treatment". It had been a little over a year since the last time this happened, and the X-Ray showed that her kidneys were half the size they were last time she was in (when they were fine). Blood tests suggested that her kidneys might be failing. The main symptom of this is dehydration, so the vet put her on a fluid IV, and told us that he wanted to keep her for the weekend, after which he'd show us how to give her subcutaneous fluids.

On Sunday he called back to tell us that even with the IV she was not rehydrating, which meant that subcutaneous fluids at home would not be enough to compensate for her poor kidneys. She was no longer eating. Today we went down to the vet to spend some time with her and found her very lethargic, though she perked up briefly when she saw us. We gave her a good brushing - which she always enjoys - and gave her a good half hour of the petting that she craves so much, which she seemed to like a lot. Then when she got too tired to hold her head up and lean into my petting hand any more, we put her to sleep. 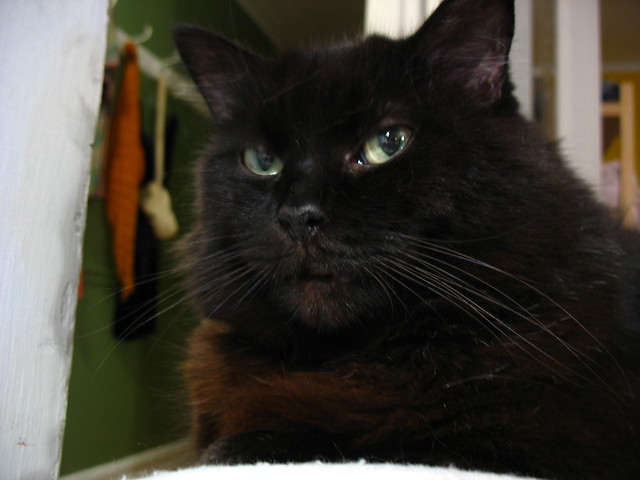 There are a lot of people reading A Song of Ice and Fire for the first time now, and unlike the rest of us they don't have to suffer through the huge wait between A Feast For Crows and A Dance With Dragons. They do have to live with the pacing problems those two books have, though... Until now!

gabrielleabelleat Mississippi Personhood Amendment
Okay, so I don't usually do this, but this is an issue near and dear to me and this is getting very little no attention in the mainstream media.

Mississippi is voting on November 8th on whether to pass Amendment 26, the "Personhood Amendment". This amendment would grant fertilized eggs and fetuses personhood status.

Putting aside the contentious issue of abortion, this would effectively outlaw birth control and criminalize women who have miscarriages. This is not a good thing.

Jackson Women's Health Organization is the only place women can get abortions in the entire state, and they are trying to launch a grassroots movement against this amendment. This doesn't just apply to Mississippi, though, as Personhood USA, the group that introduced this amendment, is trying to introduce identical amendments in all 50 states.

What's more, in Mississippi, this amendment is expected to pass. It even has Mississippi Democrats, including the Attorney General, Jim Hood, backing it.

The reason I'm posting this here is because I made a meager donation to the Jackson Women's Health Organization this morning, and I received a personal email back hours later - on a Sunday - thanking me and noting that I'm one of the first "outside" people to contribute.

So if you sometimes pass on political action because you figure that enough other people will do something to make a difference, make an exception on this one. My RSS reader is near silent on this amendment. I only found out about it through a feminist blog. The mainstream media is not reporting on it.

If there is ever a time to donate or send a letter in protest, this would be it.

- Read up on it. Wake Up, Mississippi is the home of the grassroots effort to fight this amendment. Daily Kos also has a thorough story on it.

- If you can afford it, you can donate at the site's link.

- You can contact the Democratic National Committee to see why more of our representatives aren't speaking out against this.

I'll be at the Web 2.0 Expo in NYC all next week. If anyone's interested, I'm blogging about it at my tech blog at http://notcharles.wordpress.com

And Google has jumped the shark

Seems wikileaks.org is in financial trouble. They do important work - please donate!
Collapse